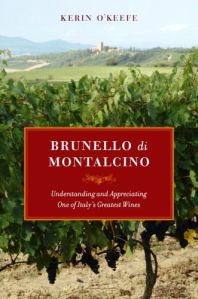 Brunello di Montalcino, one of the world’s most celebrated red wines, is particularly loved and appreciated in America. Approximately one in every four bottles of this wine is sold in this country, as consumers seemingly have identified Brunello as their favorite premium Italian wine. The fact that it’s from Tuscany doesn’t hurt, but it’s also become a bit of a status symbol among American wine drinkers, even more so than its Italian counterparts, Barolo and Amarone.

Yet few consumers really know a great deal about this wine, the territory where it is produced or the individuals who make it. The Brunello marque is so strong, the identity of this wine so associated with grandeur, that few consumers can name more than a handful of estates that craft this wine. The fact that they can drink a bottle of Brunello is what’s most important in the eyes of many.

Given this view, it’s wonderful that Kerin O’Keefe has just written Brunello di Montalcino: Understanding and Appeciating one of Italy’s Greatest Wines (312 pages, University of California Press, Berkeley, CA, $39.95). O’Keefe, an American who has been living in Italy since 1991, began writing about Italian wines a few years after that and today, is one of the world’s leading journalists on the subject, contributing articles to such publications as Decanter and The World of Fine Wine among others. Personally, I have known Kerin for about a decade, when I first met her – appropriately enough – at a tasting in Montalcino. She is a trusted colleague and someone who willingly shares her knowledge and opinions.

O’Keefe’s book is worthwhile on so many levels, combining an introduction to the area and its wines in general to a look at recent events and finally, detailed descriptions of a few dozen estates that she considers important as well as influential. One of the primary themes that she drives home in this work is that over the past three decades, the style of Brunello has undergone a serious change, at least with some producers. She writes about the introduction of French barriques – 225 liter barrels – that became fashionable for maturing Brunello in the 1980s and ’90s (and still continues today to some extent). These casks are much smaller than the large oak barrels known as botti that were the traditional vessels used to age the wines in this area. As botti range in size from 20 to 60 hectoliter – or 2000 to 6000 liters – these casks gave far less wood influence to the wines, allowing for greater varietal character (Brunello di Montalcino must of course, be produced entirely from the Sangiovese grape).

The reason why some producers made the switch to the smaller barrels, according to the author, was to try and earn a high score from one of the influential wine publications that were rewarding California and French wines – as well as the infamous Super Tuscans made from international varieties – for their dark colors and super ripe fruit qualities. O’Keefe describes the characteristics of these barrique-aged wines as having “intense chocolate, vanilla and toast influences of new oak;” for the author, this was not beneficial for a wine made with Sangiovese, as the oak flavors “weighed down the variety’s vibrant cherry-berry and mineral sensations.” She is clearly opposed to barriques – she labels this trend in Montalcino as “the dark side” – and she also quotes area producers who explain why barriques significantly alter the true character of a Brunello, resulting in a loss of tradition as some producers opted for instant fame. (The author is also quick to point out that thankfully, there are still many estates that have stayed with the time-honored ways of producing Brunello.)

O’Keefe also goes into great detail about the infamous Brunello scandal of 2008, when it was reported that the prosecutor of Siena had charged four producers with using varieties other than Sangiovese in their Brunello. Given the deep ruby red and purple colors of some of the examples, journalists had been suspecting this for several years, but now here it was officially out in the open. Much was written over the past three years about this sorry affair (not all of it true); O’Keefe’s account of this situation is the best version I have read, not only for its attention to detail, but also in its fairness (she lets one of the accused producers have his say about his winery’s involvement). 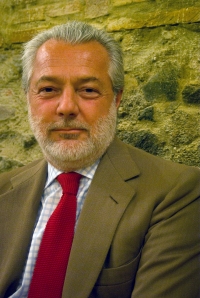 Francesco Marone Cinzano, Proprietor, Col d’Orcia  – Col d’Orcia is one of the leading producers of Brunello in the traditional style and one of the author’s favorites. (Photo ©Tom Hyland)

The author takes a close look at the best producers of Brunello, organizing them by subzone and explaining why the best wines take on a sense of the local terroir. Among her favorites are companies such as Col d’Orcia, Poggio di Sotto, Lisini and Biondi-Santi (the author had previously penned a book on this last producer.) She writes about their particular conditions, both in the vineyards and the cellar and contributes a nice summary of the characteristics of each particular wine from these vintners. I love the fact that O’Keefe has omitted several famous Brunello producers, as they favor a modern approach not in step with her likes, while for some producers (such as Banfi), she includes them for their influence, but at the same time, takes them to task for their business practices as well as the style of their wines.

O’Keefe ends the book with a section entitled, “Beyond Brunello,” in which she describes other wines of the area (Rosso di Montalcino, Sant’Antimo, e.g.) as well as lending some valuable tips on pairing Brunello with local foods. This section alone, particularly the food and wine recommendations, should prove to be of invaluable help to anyone touring this area or trying to impress friends at dinner.

In an era where there is so much misinformation about any number of wines and wine news, it’s refreshing to read the work of an author who not only knows her subject in great detail, but one who is opinionated and tells her story in an engaging fashion. Whether you are just discovering Brunello di Montalcino or have been enjoying these wines for decades, this book is highly recommended.

8 thoughts on “The Real Story of Brunello di Montalcino”